The past 50 years have witnessed remarkable changes in American fire policy, institutions, sciences, and practices. Yet the standard history, Fire in America, ends in the 1970s. It misses the momentous events that make America's great cultural revolution on fire. But more is at stake than missing years. The revolution changed the storyline. It deserves its own narrative and its own pyrogeography. Now it has them.

For an account of how the books came to be, see below the book descriptions.

Between Two Fires: A Fire History of Contemporary America
A grand narrative of ideas, institutions, and fires.

To the Last Smoke
A suite of regional reconnaissances, each approximately 200 pages.

I expect to complete travels and draft manuscripts by the end of 2017, with publication as soon as possible afterwards.

The idea began in conversations with Lincoln Bramwell, chief historian at the U.S. Forest Service (and a former hotshot, Sawtooth IHC). We agreed that the standard history, Fire in America, needed updating. The book ended, creakily, in the late 1970s. If we date modern American wildland fire from 1910, then the book spanned less than 60 of those years, while another 40 years have passed. We needed a history to encompass that recent era, which was also the time when the fire community revolutionized its policies and programs.

I proposed a two-book project. One would narrate the national history since 1960 - call it the play by play. The other would explore through a collection of essays some of the interesting details that a narrative can't easily hold - think of it as color commentary. Tom Harbour, then director of FAM, was enthusiastic but rightly wanted interagency support. The DOI signed on. Later, so did JFSP. These were books funded by and written for the American fire community.

The narrative, Between Two Fires: A Fire History of Contemporary America, was written by 2013. We tried to publish through the Government Printing Office but that ambition crashed early in the editing. Instead we turned to the University of Arizona Press. The book appeared in November, 2015.

Between Two Fires opens with a panoramic survey of the American fire scene in 1960, a time when the Forest Service was a hegemon in ways that are difficult to imagine today. The USFS controlled almost every aspect of fire policy, practice, and research. It was the integrative matrix for a national program. It was regarded as a paragon of public administration.

That near-monopoly provides a narrative anchor point for showing the evolution of changes in policy and institutional arrangements, beginning with what we might aptly call a fire revolution that first announced itself in 1962 when Tall Timbers Research Station hosted its first fire ecology conference and the Nature Conservancy conducted its inaugural prescribed burn. Over the next 15 years every federal land agency had its organic act revised or received its first charter. That change in purpose led to reforms in how they wanted to manage fire. The old edifice rapidly fragmented. The NPS adopted a policy of fire restoration in 1968; the Forest Service, in 1978. The ideas (and the idealism) behind restoring fire are not new. Again taking 1910 as a historical marker, as many years have passed since the opening of the fire revolution as had passed before it.

In brief, the 50 years after the Big Blowup were spent creating a national infrastructure, organized around the Forest Service, to exclude fire as far as possible. The next 50 years tried to promote a pluralism of policies and interested parties - tried to reassemble the pieces left after the breakup and the many agencies, both public and private, that subsequently joined. I had intended to end the book in 2010 with the centennial of the Big Blowup, but the big fires kept coming, and the narrative rolled with them, finally coming to rest in 2013.

So what two fires does the narrative pass between? There are many. The big blowups of the past and the megafires of today. Nature's fires and humanity's. Wild fires and prescribed fires. The fires that burn living landscapes and those that burn lithic ones - the combustion of fossil fuel that is the real big burn of today. America's fire history is part of a global fire history.

The text itself has two parallel styles that illustrate this theme by alternating chapters on ideas and institutions with shorter summaries of particular fires or fire seasons. Over the decades the fires change character: they reveal the evolving fire scene. Save for the prologue and epilogue the narrative is always itself between two fires. The fire problem is not something we can fix. It's something we live with.

To the Last Smoke

The color commentary began with blogs posted during my research travels in Florida. But there was something every day, and it was material no one seemed to be writing about. The number of essays grew. They began to self-organize, one cluster around Tallahassee (the Silicon Valley of prescribed fire) and another along my route of travel from north to south, where fire and water converge on the Everglades. I decided they deserved a frame. A prologue gave a thumbnail history of what makes Florida distinctive. An epilogue placed it within the national narrative, or Florida "between two fires." The upshot was a manuscript a little under 60,000 words - a short book; printed, about 200 pages. I had a template.

I carried the same loose formula to California, which divided north and south, and to the Northern Rockies, which had two portals, one at Lolo Pass and one at the Gates of the Mountains. Those were the big three fire regions I had wanted to survey. But I began to think of a series of books that would spread into other regions. I still had funds in the research account. I added the Southwest and the Great Plains. The Plains introduced another variation, a mini-survey of 20,000 words, which I decided I needed for Texas, which wasn't integrated yet wasn't autonomous either. (Would Texans have wanted it any other way?) The University of Arizona Press agreed to publish the series under the collective title, To the Last Smoke.

I managed to squeeze out a volume on the interior West and a mini-survey on the oak woodlands before the funding ran out. Along the way I had written some topical essays that didn't fit into any of the targeted regions; I gathered these into a second-order anthology called Here and There. Then Ron Dunton approached me at a conference and asked if I would consider Alaska. Of course I would. The BLM provided funds through the Joint Fire Science Program, which added some more so I could complete the series as conceived.

The additional money and time meant I could add two books. One would look at the Northeast, not an active arena on the national scene today but of great interest to a historian and in many ways a possible harbinger of what the future might look like elsewhere. The other would assemble three mini-surveys: one for the oak woodlands, one for Alaska, and one for the Pacific Northwest. I was determined to complete my travels and manuscripts by the end of 2017 - the 50th anniversary of my first season in fire. Actual publication will probably extend into early 2019.

When published, To the Last Smoke will hold nine volumes. The books have evolved. Florida was journalistic - serious, historically informed, but built mostly on personal essays. The subsequent volumes have become more deliberate; more background research, more calculation in the choice of topics, though I have tried to keep a less formal tone. They have value today - that's why I wrote them - though I believe they may hold more interest in the future because they present a panorama of the American fire scene at a particular time in our national history refracted through a single voice and vision.

I know only too well how much is missing in both books.

There are gaps in documentation beginning in the 1980s. A lot of stuff is not in the archives; and a lot of stuff was beginning to go digital but was not saved. Despite what may seem its length and density, Between Two Fires has serious gaps that I partly filled from my personal experience of having lived through the era. By training and temperament, though, I'm a historian. There are reasons why it's customary to wait 40 or 50 years before taking on a topic. But I think we needed something now.

The reconnaissance by region also has omissions. The southeast got lost because I began with Florida, and telescoped the region into that eccentric state. The Southern Appalachians will similarly get compressed into an essay on the Gatlinburg fire. The Lake States, enormously important in the lead-up to a national fire program, have been less so in the postwar era; they get a long essay in the Northeast volume. The Pacific Northwest, also historically significant in the first half of the 20th century, is less so in the latter half; it gets a mini-survey. There were places missed in the Plains and the Northern Rockies; intriguing states like Arkansas, Minnesota, and Washington got elided out; changes in access to tribal lands made it difficult to include as many as I would have liked. "Human subjects" constraints limited what I could do by way of personal profiles. Writing, like politics, is the art of the possible. I had to pass between two fires. This is what survived.

There were lots of surprises. I had spent many years viewing fire history on a continental scale. Moving from satellite surveillance into the pixels and polygons of particular places forced me to reconsider what I thought I knew. I had not understood the richness of the Florida fire scene until I walked around it. I had not appreciated the way in which nearly every fire story in California seems to end in suppression regardless of what fire officers might wish. I had not sensed how powerful the role of generations was in the Northern Rockies until I began to probe through the literature. Until I toured the Great Basin, I had not imagined the ways in which knowledge came and went, along with species. Every place had a fascinating story. Everywhere had something new. The grand tour has been equally enlightening and humbling.

And there is plenty yet for someone to do. 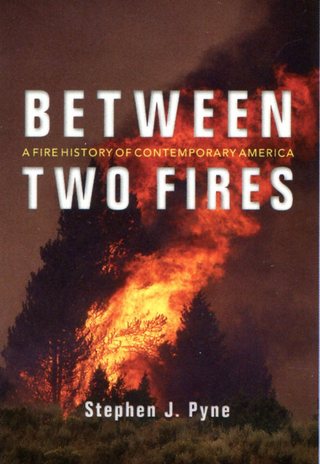 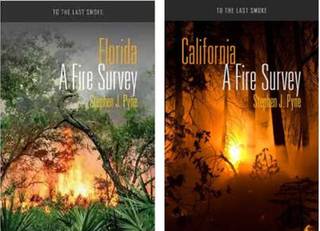 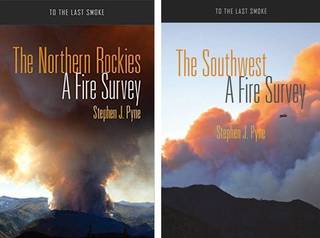 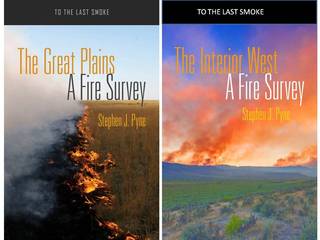